The district was formed in 1832 during the days of British commissioner of Mysuru Sir Mark Cubbon as Chitaldroog Division including the area of present Chitradurga and Tumakuru districts headquartered at Tumakuru, Major General Richard Stewart Dobbs was the first collector of the district (term of office 1835–1861), who was key responsible for the establishment of Munro system of administration.[8] In the year 1862 Chitaldroog division was abolished and Tumakuru (Nandidroog division) and Chitradurga (Nagar Division) established as separate districts by Lewin Bentham Bowring.[9] The district occupies an area of 10,598 km² and had a population of 2,678,980, of which 19.62% were urban as of 2011.[10][11] The district is known for the production of coconuts, called as 'Kalpataru Nadu'.[7] It is the only discontiguous district in Karnataka (Pavagada Taluk has no geographical continuity with the rest of the district).

Tumakuru District has ten talukas, eleven Assembly constituencies[12] and the District is shared among three Parliamentary constituencies. Tumakuru District shares border with eight districts, which is the highest in the state. The districts that share the border are Districts of Chitradurga towards north, Hassan and Chikkamagaluru towards west, Mandya towards south-west, Ramanagara and Bengaluru Rural towards south, Chikkaballapura towards east and Ananthapuram (Andhra Pradesh) towards north-east.

It consists chiefly of elevated land intersected by river valleys. A range of hills rising to nearly 4,000 feet (1,200 m) crosses it from north to south, forming the watershed between the systems of the Krishna and the Kaveri. The principal streams are the Jayamangali and the Shimsha. The mineral wealth of Tumakuru is considerable; iron is obtained in large quantities from the hillsides; and excellent building-stone is quarried. The slopes of the Devarayanadurga hills are clothed with forests.[13] Wildlife such as leopards, Indian Hyena, bears and wild boar have been recorded here. Although, tigers have been recorded from these forests as late as the 1950s, most recent reports are of stray sightings and need confirmation.[14] The annual rainfall averages 39 inches. 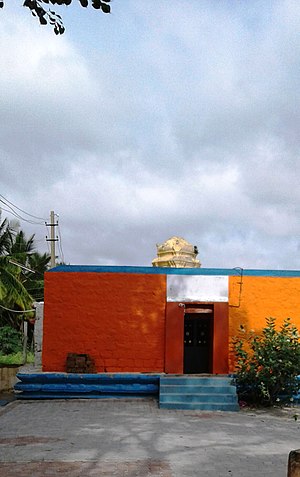 The known history of the Tumkur district begins with the Gangas. The Ganga family ruled over the southern and eastern districts of the State from early in the Christian era to 1025 A.D. The earliest record of the Ganga family found in this district belongs to about 400 A.D. After the Gangas, Tumkur was ruled by the Rastrakutas and the Chalukyas. The Nolambas under these rulers ruled the area for a long time. The cholas also ruled some parts of the district. The Vijayanagara Empire ruled supreme for the later part of the 13th to 17th century. During the 18th and 19th century, Tumkur was ruled by the Wodeyars of Mysore until Independence.

The Tumkur Town Municipality was set up by the British and Mysore Wodeyars in the 1916. Self-rule of the residents of Tumkur started after the setting up of the municipality. Tumkur was converted into a City Corporation only in 2010 by adding 22 villages adjoining the city. The population is 305,877 as per the 2011 census. Tumkur is now a middle class majority city, with a literacy rate of 80%, mainly traders, government employees, small and medium industrialists, self-employed individuals etc. The GDP of Tumkur is around 166 billion (2014) and the total collection of income tax in the last financial year was approximately 800 million. The aspirational level of the citizens is very high. Being an agrarian economy, the major plantation crops of Tumkur are coconuts and areca nuts. The major cash crops are paddy, ragi and groundnuts. Iron ore, manganese and granite are the major minerals found in Tumkur District.

Owing to its proximity to Bangalore, besides being the gateway to Karnataka, being on the Chennai – Mumbai Industrial Corridor and the infrastructure that Tumkur provides, Tumkur has the potential to be the satellite city to decongest the State Capital of Bangalore. And also has been identified as National Investment and Manufacturing Zone (NIMZ). NIMZ of approx. 13500 acres and the HAL Helicopter manufacturing facility (Nr Gubbi) 610 acres will be developed as integrated industrial townships with state-of-the art infrastructure and land use on the basis of zoning; clean and energy efficient technology; necessary social infrastructure; skill development facilities, etc., for promoting world class manufacturing activity. Tumkur is home to 24 large scale industries with an investment of 9114.2 million and generating an employment for 6445 persons. The existing 15 medium scale industries and 23804 micro and small Industries employ 132994 persons and account for an investment of close to 7.90 billion. Also 2000 MW of Solar power plant on 11000 acres in Pavagada to cater to the power needs of Tumkur and adjoining districts.

Tumkur is a knowledge hub in the south interior Karnataka and boasts of its own Tumkur University, two medical colleges, five engineering colleges, 38-degree and post-graduate colleges, one dental college and many polytechnics, high schools and primary schools imparting top level education to all classes of citizens.

The Indian budget for 2014–2015 held on 10 July 2014 had announced that Tumkur is one of the cities in south India to be developed as an "Industrial Smart" city. The city was selected as one among the 100 in the country shortlisted for the Smart City project. Tumkur is competing now to be one among the 20 to be taken up for development. The government of India has promised 1 billion each as a matching grant for five years and the local Body with assistance from the state government has to match another 1 billion. Thus, in five years development to the tune of 10 billion will happen in Smart City. The Tumkur District Chamber of Commerce and Industry under the leadership of Surendra Shah, President 2014–16 is striving for the district to be developed as a KNOWLEDGE INDUSTRY NEW DESTINATION CITY (KIND).

Tumkur is a good study center from primary education to higher education. It has its own university. Within this town, there are seven technology institutions, two medical institutions and one dental institution.