From Bharatpedia, an open encyclopedia
Jump to navigation Jump to search
Share
For other uses, see Sandalwood (disambiguation).

Sandalwood is a class of woods from trees in the genus Santalum. The woods are heavy, yellow, and fine-grained, and, unlike many other aromatic woods, retain their fragrance for decades. Sandalwood oil is extracted from the woods for use. Sandalwood is often cited as one of the most expensive woods in the world. Both the wood and the oil produce a distinctive fragrance that has been highly valued for centuries. Consequently, some species of these slow-growing trees have suffered over-harvesting in the past.

The nomenclature and the taxonomy of the genus are derived from this species' historical and widespread use. Etymologically it is ultimately derived from Sanskrit चन्दनं Chandanam (čandana-m), the sandalwood tree, meaning "wood for burning incense" and related to candrah, "shining, glowing" and the Latin candere, to shine or glow. It arrived in English via Late Greek, Medieval Latin and Old French in the 14th or 15th century.[1]

A closeup of sandal saplings

Sandalwoods are medium-sized hemiparasitic trees, and part of the same botanical family as European mistletoe. Notable members of this group are Indian sandalwood (Santalum album) and Australian sandalwood (Santalum spicatum); others in the genus also have fragrant wood. These are found in India, Nepal, Bangladesh, Pakistan, Sri Lanka, Australia, Indonesia, Hawaii, and other Pacific Islands.

Various unrelated plants with scented wood and also referred to as sandalwood, but not in the true sandalwood genus:

Producing commercially valuable sandalwood with high levels of fragrance oils requires Indian sandalwood (S. album) trees to be a minimum of 15 years old – the yield, quality and volume are still to be clearly understood. Yield of oil tends to vary depending on the age and location of the tree; usually, the older trees yield the highest oil content and quality. Australia is the largest producer of S. album, with the majority grown around Kununurra, in the far north of the state by Quintis (formerly Tropical Forestry Services), which in 2017 controlled around 80 per cent of the world's supply of Indian sandalwood,[5] and Santanol.[6] India used to be the world's biggest producer, but it has been overtaken by Australia in the 21st century. Over-exploitation is partly to blame for the decline.[7][8]

Australian sandalwood (S. spicatum) is grown in commercial plantations throughout the wheatbelt of Western Australia, where it has been an important part of the economy since colonial times. As of 2020[update] WA has the largest plantation resource in the world.[9]

Sandalwood is expensive compared to other types of woods, so to maximize profit, sandalwood is harvested by removing the entire tree instead of sawing it down at the trunk close to ground level. This way wood from the stump and root, which possesses high levels of sandalwood oil, can also be processed and sold.[10]

Australian sandalwood is mostly harvested and sold in log form, graded for heartwood content. The species is unique in that the white sapwood does not require removal before distilling the oil. The logs are either processed to distill the essential oil, or made into powders for making incense. Indian Sandalwood, used mainly for oil extraction, does require removal of the sapwood prior to distillation. As of 2020[update], Australian Sandalwood oil sells for around US$1,500 per 1 kilogram (2.2 lb), while Indian Sandalwood oil, due to its higher alpha santalol content, is priced at about US$2,500 per kg.[9]

Sandalwood is often cited as one of the most expensive woods in the world, along with African blackwood, pink ivory, Agarwood and ebony.[11][12]

Sandalwood oil has a distinctive soft, warm, smooth, creamy, and milky precious-wood scent. It imparts a long-lasting, woody base to perfumes from the oriental, woody, fougère, and chypre families, as well as a fixative to floral and citrus fragrances. When used in smaller proportions in a perfume, it acts as a fixative, enhancing the longevity of other, more volatile, materials in the composite. Sandalwood is also a key ingredient in the "floriental" (floral-ambery) fragrance family – when combined with white florals such as jasmine, ylang ylang, gardenia, plumeria, orange blossom, tuberose, etc.

Sandalwood oil in India is widely used in the cosmetic industry. The main source of true sandalwood, S. album, is a protected species, and demand for it cannot be met. Many species of plants are traded as "sandalwood". The genus Santalum has more than 19 species. Traders often accept oil from closely related species, as well as from unrelated plants such as West Indian sandalwood (Amyris balsamifera) in the family Rutaceae or bastard sandalwood (Myoporum sandwicense, Myoporaceae). However, most woods from these alternative sources lose their aroma within a few months or years.

Isobornyl cyclohexanol is a synthetic fragrance chemical produced as an alternative to the natural product.

Sandalwood's main components are the two isomers of santalol (about 75%). It is used in aromatherapy and to prepare soaps.[13]

Due to its low fluorescence and optimal refractive index, sandalwood oil is often employed as an immersion oil within ultraviolet and fluorescence microscopy.

Aboriginal Australians eat the seed kernels, nuts, and fruit of local sandalwoods, such as the quandong (S. acuminatum).[14] Early Europeans in Australia used quandong in cooking damper by infusing it with its leaves, and in making jams, pies, and chutneys from the fruit.[14] In Scandinavia, pulverised bark from red sandalwood (Pterocarpus soyauxii) is used - with other tropical spices - when marinating anchovies and some types of pickled herring such as matjes, sprat, and certain types of traditional spegesild, inducing a reddish colour and slightly perfumed flavour.[15][16][17]

Present-day chefs have begun experimenting in using the nut as a substitute for macadamia nuts or a bush food substitute for almonds, hazelnuts, and others in Southeast Asian-styled cuisine.[18] The oil is also used as a flavour component in different food items, including candy, ice cream, baked food, puddings, alcoholic and nonalcoholic beverages, and gelatin. The flavouring is used at levels below 10 ppm, the highest possible level for use in food products being 90 ppm.

Sandalwood must be distilled so that the oil can be extracted from within. Many different methods are used, including steam distillation, water distillation, CO2 extraction, and solvent extractions. Steam distillation is the most common method used by sandalwood companies. It occurs in a four-step process, incorporating boiling, steaming, condensation, and separation. Water is heated to high temperatures (60–100 °C or 140–212 °F) and is then passed through the wood. The oil is very tightly bound within the cellular structure of the wood, so the high heat of the steam causes the oil to be released. The mixture of steam and oil is then cooled and separated so that the essential oil can be collected. This process is much longer than any other essential oil's distillation, taking 14 to 36 hours to complete, but generally produces much higher quality oil. Water, or hydro, distillation is the more traditional method of sandalwood extraction which involves soaking the wood in water and then boiling it until the oil is released. This method is not used as much anymore because of the high costs and time associated with heating large quantities of water.[citation needed] 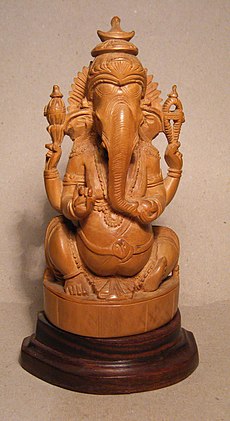 Indian sandalwood is very sacred in the Hindu Ayurveda and is known in Sanskrit as chandana.[19] The wood is used for worshipping the god Shiva, and it is believed that goddess Lakshmi lives in the sandalwood tree. The wood of the tree is made into a paste using sandalwood powder, and this paste is integral to rituals and ceremonies, to make religious utensils, to decorate the icons of the deities, and to calm the mind during meditation and prayer. It is also distributed to devotees, who apply it to their foreheads or necks and chests.[20] Preparation of the paste is a duty fit only for the pure, so is entrusted only to priests when used in temples and during ceremonies.

The paste is prepared by grinding wood by hand with granite slabs shaped for this purpose. With the gradual addition of water, a thick paste forms (called kalabham "കളഭം" in Malayalam language and gandha ಗಂಧ in Kannada) and is mixed with saffron or other such pigments to make chandanam. Chandanam, further mixed with herbs, perfumes, pigments, and some other compounds, results in javadhu. Kalabham, chandanam, and javadhu are dried and used as kalabham powder, chandanam powder, and javadhu powder, respectively. Chandanam powder is very popular in India and is also used in Nepal. In Tirupati after religious tonsure, sandalwood paste is applied to protect the skin. In Hinduism and Ayurveda, sandalwood is thought to bring one closer to the divine. Thus, it is one of the most used holy elements in Hindu and Vedic societies.[citation needed]

Sandalwood use is integral part of daily practices of Jainism. Sandalwood paste mixed with saffron is used to worship tirthankar Jain deities. Sandalwood powder is showered as blessings by Jain monks and nuns (sadhus and sadhvis) to their disciples and followers. Sandalwood garlands are used to dress the body during Jain cremation ceremonies. During the festival of Mahamastakabhisheka that is held once in every 12 years, the statue of Gommateshwara is then bathed and anointed with libations such as milk, sugarcane juice, and saffron paste, and sprinkled with powders of sandalwood, turmeric, and vermilion.[21]

Sandalwood is mentioned in various suttas of the Pāli Canon.[22] In some Buddhist traditions, sandalwood is considered to be of the padma (lotus) group and attributed to Amitabha Buddha. Sandalwood scent is believed by some to transform one's desires and maintain a person's alertness while in meditation. It is also one of the most popular scents used when offering incense to the Buddha and the guru.

In East Asia, sandalwood (檀木), along with agarwood (沉香木), is the most commonly used incense material by the Chinese, Korean and Japanese in worship and various ceremonies. However, some sects of Taoists, following the Ming Dynasty Taoist Manual, do not use sandalwood (as well as benzoin resin, frankincense, foreign produced) incense and instead either use agarwood, or better still Acronychia pedunculata, in worship.[24] In Korean Shamanism, sandalwood is considered the Tree of Life.

Zoroastrians offer sandalwood twigs to the afarganyu, the urn in which the fire is kept at the fire temple (called agiyari in Gujarati and dar-e mehr in Persian), to keep the fire burning during religious ceremonies. After the firekeeping priests complete the ceremony, attendees are allowed to come up to the afarganyu and place their own pieces of sandalwood into the fire. Fire has been a sacred symbol in the Zoroastrian religion since ancient times and it is considered very important to keep the fires in the temples constantly burning. Because of its high sensitivity to fire, sandalwood works very well for this. Also, the wood has been accepted by the Yasna and Yashts as an appropriate fuel for the fire. It is offered to all of the three grades of fire in the fire temple, including the Atash Dadgahs. Sandalwood is not offered to the divo, a smaller lamp that is kept in the homes of Zoroastrians. Often, money is offered to the mobad (for religious expenditures) along with the sandalwood. Sandalwood is called sukhad in the Zoroastrian community. The sandalwood in the fire temple is often more expensive to buy than at a Zoroastrian store. It is often a source of income for the fire temple.[citation needed]