The northern plains gray langur (Semnopithecus entellus), also known as the sacred langur, Bengal sacred langur and Hanuman langur, is a species of primate in the family Cercopithecidae.

The range of the northern plains gray langur covers a large portion of India south of the Himalayas south to the Tapti River and the Krishna River.[6][7] It is thought to have been introduced to western Bangladesh by Hindu pilgrims on the bank of the Jalangi River.[1] 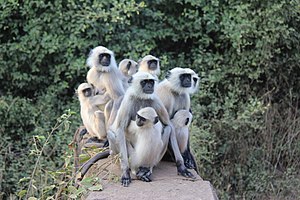 The northern plains gray langur can live in several different types of groups. It can live in groups of multiple males and females, one male and multiple females or multiple males with no females, and males can also live alone without a group.[7] Single male groups are most common.[7] Group size can exceed 100 monkeys.[7] Upon reaching maturity, males typically emigrate from their natal group while females typically remain.[6][7] Young adult females are typically dominant over older females.[6] When a new male takes over a group it may engage in infanticide of young fathered by the previous male or males, but this is less common when the takeover occurs slowly over several months.[6][7]

The northern plains gray langur eats primarily fruits and leaves.[7] It is able to survive on mature leaves, which is a key to its ability to survive throughout the dry season.[6] It also eats seeds, flowers, buds, bark and insects, including caterpillars.[6] It is also fed fruits and vegetables by humans, and some groups get a substantial portion of their diets from food provided by temples and from raiding crops.[7]

Groups that have access to abundant food year-round, for example those that are provisioned by temples or are able to raid crops year-round, also breed throughout the year.[6] Other groups, such as those living in forests, typically give birth between December and May.[6] The gestation period is about 200 days.[6] Females other than the mother alloparent the infant for the first month of its life.[6] Weaning occurs at about 1 year and males reach maturity at about 6 to 7 year old.[6]

A captive gray langur. According to the Indian Wildlife (Protection) Act, it is illegal to hold the species in captivity.

A dead Northern Plains Gray Langur (Semnopithecus entellus) is given funeral as per Hindu rituals in Odisha, India. According to the Indian Wildlife (Protection) Act, it is illegal to handle the species, dead or alive, without procuring requisite permissions from the forest department.

Captive gray langurs are used in Dehli to scare off rhesus macaques, which steal from and sometimes attack people.[8][9]