Hinduism is the largest religion in India. According to the 2011 Census of India, 966.3 million people identify as Hindu,[1] representing 79.8% of the country's population. India contains 94% of the global Hindu population, the world's largest Hindu population.[2] Islam is followed by 14.2% of the population, with the remaining 6% adhering to other religions (such as Christianity, Sikhism, Buddhism, Jainism, various indigenous ethnically-bound faiths, atheism) or having no religion.[3][4] The vast majority of Hindus in India belong to Shaivite and Vaishnavite denominations.[5] India is one of the three countries in the world (Nepal and Mauritius being the other two) where Hinduism is the dominant religion.

The Vedic culture developed in India in 1500 BCE and 500 BCE.[6] After this period, the Vedic religion merged with local traditions and the renouncer traditions, resulting in the emergence of Hinduism,[7] which has had a profound impact on India's history, culture and philosophy. The name India itself is derived from Sanskrit Sindhu, the historic local appellation for the Indus River.[8] Another popular alternative name of India is Hindustān, meaning the "land of Hindus".[9]

India saw the rule of both Hindu and Muslim rulers from c. Template:CE to Template:CE.[10] The fall of Vijayanagar Empire to Muslim sultans had marked the end of Hindu dominance in the Deccan. Hinduism once again rose to political prestige, under the Maratha Empire.[11][12]

I find no parallel in history for a body of converts and their descendants claiming to be a nation apart from the parent stock.

— Mahatma Gandhi, opposing the division of India on the basis of religion in 1944.[13]

Hindu nationalism was promoted by Hindus such as:

The 1947 Partition of India gave rise to bloody rioting and indiscriminate inter-communal killing of Hindus, Muslims, and Sikhs. Around 7.5 million Muslims were moved and left for West Pakistan and East Pakistan (now known as Bangladesh) and 7.2 million Hindus and Sikhs moved to India.[14] This was a major factor in fuelling animosity between Hindus and Sikhs, and Muslims. What followed over the years was the laying of secular principles in the Indian Constitution.[15] The last 60 years have been peaceful in most parts of the country apart from the notable exceptions of communal riots in 1992 Bombay riots, following the demolition of the Babri mosque by extremists, and the 2002 Gujarat riots.[16][17]

Andhra Pradesh and northeast India are two of the regions where conversion is prevalent. In response to the activities of Christian missionaries in India, hardline Hindu groups such as Vishwa Hindu Parishad (VHP) have aggressively started reconversion of converted Christians as well as Muslims to Hinduism.[18] The Hindus still form the majority community in most states and territories of the country. Most of the north and northwest India, especially Gujarat, remains the stronghold of Hinduism. There is reason to believe that Hinduism is growing through the incorporation of tribal belief-systems in specific areas of the northeast.[19] However, in the Kashmir Valley, the Hindu population has decreased as a result of the terrorism which forced 550,000 members of Kashmiri Pandit community to leave the valley by Islamist insurgents.[20] In Punjab, the Sikhs form the majority population.

Among the community, it is estimated that Forward castes comprise 26 per cent, Other Backward Classes comprise 43%, Scheduled Castes (Dalits) comprises 22% and Scheduled Tribes (Adivasis) comprise 9%.[22]

Of the 28 states in India, Hindus form majority in 22 states except for Punjab (Sikh majority), Meghalaya, Arunachal Pradesh, Nagaland and Mizoram (Christian majority). In Manipur, Hinduism is a plurality religion, where Hinduism is practised by 41.39% and Christianity is followed by 41.29%.[23] Out of the eight Union territories, Hindus form majority in five; Ladakh has a Muslim plurality, where Islam is practised by 46% and Buddhism is followed by 40%, while Jammu and Kashmir and Lakshadweep have a Muslim majority.[23][24]

Out of the eight states of northeast India, Tripura, Sikkim, and Assam are Hindu majority while four have Hindus as a minority, and one as a plurality.[27] 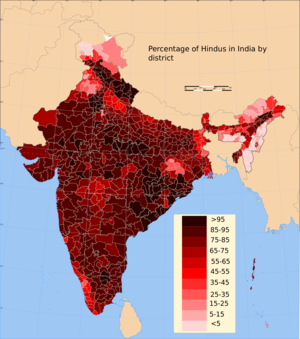 Percentage of Hindus in each district. Data derived from 2011 census.

A decrease in the 1991–2001 period is observed in Manipur, from 57% to 52% population share, where there has been a resurgence of the indigenous Sanamahi religion. The Hindu Population share in Manipur decreased also in 2001–2011 from 52% to 41.4%. The religious conversion of Hindus to Christianity and migration of Christians from Nagaland are considered as the reason for this decrease in Hindu population.[28]

According to the Pew research center, by 2050 India will have largest population of Hindus in the world. The world Hindu population will closely reach 1.4 billion around that time, of which 1.3 billion Hindus (93% of the world's Hindus) will continue to live in India and will constitute 77% of the country's population, down from 80% in 2010.[38][39] 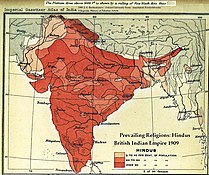 The All India Hindu Convention demanded that India should be declared "Hindu state" officially as well as various pro-Hindu and patriotic organisations all over India and abroad are striving to establish Hindu Rashtra.[40] Earlier Saint Mahant Paramhans Das of Tapasvi Chhavni Ayodhya, has written a letter to India's President Ram Nath Kovind listing his seven demands and the one of them is to declare India as Hindu state. Copies of the letter have been forwarded to Prime Minister Narendra Modi, home minister Amit Shah, chief minister Yogi Adityanath, and district magistrate of Ayodhya.[41] There is no mention of the term “Basic Structure” anywhere in the Indian Constitution. The idea that the Parliament cannot introduce laws that would amend the basic structure of the constitution evolved gradually over time.[42] Constitutionally speaking, the declaration of a Hindu rashtra would merely require a 15-judge Supreme Court bench to overrule the basic structure limitation on the Parliament’s power to amend the Constitution.[43] However, "Project Hindu Rashtra bill" has been stopped before 2024 election which is also an ultimate goal for upcoming Lok Sabha election.[44] Earlier, Uttar Pradesh's BJP MLA Surendra Singh have also given a hint, that by 2024, India will be officially declared as Hindu Nation.[45] The idea of India as a Hindu State has been advocated many a times by right-wing Hindu nationalist political parties.[46]