India has a parliamentary system as defined by its constitution, with power distributed between the central government and the states.

The President of India is the ceremonial head of the country and supreme commander-in-chief for all defence forces in India.

India is regionally divided into States (and Union Territories) and each State has a Chief Minister who is the leader of the party or political alliance that has won a majority in the regional elections otherwise known as State Assembly Elections that exercises executive powers in that State. The respective State's Chief Minister has executive powers within the State and works jointly with the Prime Minister of India or their ministers on matters that require both State and Central attention. Some Union Territories also elect an Assembly and have a territorial government and other (mainly smaller) Union Territories are governed by a person appointed by the President of India.

The President of India monitors the rule of law through their appointed governors in each State and on their recommendation can take over the executive powers from the Chief Minister of the State, temporarily when the elected representatives of the State government has failed to create a peaceful environment and has deteriorated into chaos. The President of India dissolves the existing State government if necessary, and a new election is conducted.

Election Commission is the federal body of India which is enacted under the provisions of the Constitution, responsible for monitoring and administering all the electoral processes of India. This body is responsible for ensuring elections are free and fair, without any bias.[1]

Election Commission ensures the conduct of members pre-elections, during elections, and post-elections are as per the statutory legislation.

Elections in the Republic of India include elections for :

Members of Lok Sabha (House of the People) or the lower house of India's Parliament are elected by being voted upon by all adult citizens of India, from a set of candidates who stand in their respective constituencies. Every adult citizen of India can vote only in their constituency. Candidates who win the Lok Sabha elections are called 'Member of Parliament' and hold their seats for five years or until the body is dissolved by the President on the advice of the council of ministers. The house meets in the Lok Sabha Chambers of the Sansad Bhavan in New Delhi, on matters relating to the creation of new laws, removing or improving the existing laws that affect all citizens of India. Elections take place once in 5 years to elect 543 members for the Lok Sabha (Lower house).[2]

Members of State Legislative Assembly, are elected directly by voting, from a set of candidates who stands in their respective constituencies. Every adult citizen of India can vote only in their constituency. Candidates who win the State Legislative Assemblies elections are called 'Member of Legislative Assembly' (MLA) and hold their seats for five years or until the body is dissolved by the Governor. The house meets in the respective state, on matters relating to the creation of new laws, removing or improving the existing laws that affect all citizens living in that state.

The total strength of each assembly depends on each State, mostly based on size and population. Similar to the Lok Sabha elections, the leader of the majority party/alliance takes oath as Chief Minister of the State.

When an elected candidate to either the State Assembly or Lok Sabha or Rajya Sabha leaves the office vacant before their term ends, a by-election is conducted to find a suitable replacement to fill the vacant position. It is often referred to in India as Bypolls.

But other reasons occur when the incumbent becomes ineligible to continue in office (criminal conviction, or failure to maintain a minimum attendance in the office or due to election irregularities found later. Also, when a candidate has won more than one seat, they have to vacate one).

The Rajya Sabha, also known as the Council of States, is the upper house of India's Parliament. Candidates are not elected directly by the citizens, but by the Members of Legislative Assemblies and up to 12 can be nominated by the President of India for their contributions to art, literature, science, and social services. Members of the Parliament in Rajya Sabha get a tenure of six years, with one-third of the body facing re-election every two years. Rajya Sabha acts as a second-level review body before a bill becomes an act.[10]

The Vice President of India is the ex-officio Chairman of the Rajya Sabha, who presides over its sessions.

The Legislative proposals (making new laws, removing or appending new conditions to the existing law) are brought before either house of the Parliament in the form of a bill. A bill is the draft of a legislative proposal, which, when passed by both houses of Parliament (Lok Sabha and Rajya Sabha) and assented to by the President, becomes an Act of Parliament.

The Constitution of India, however, places some restrictions on the Rajya Sabha which makes the Lok Sabha more powerful in certain areas. For example, it stipulates that Money bills must originate in the Lok Sabha.

Candidates are required to file their nomination papers with the Electoral Commission. Then, a list of candidates is published. No party is allowed to use government resources for campaigning. No party is allowed to bribe the candidates before elections. The government cannot start a project during the election period. Campaigning ends by 6:00 pm two days before the polling day.

The polling is held between 7:00 am and 6:00 pm. The Collector of each district is in charge of polling. Government employees are employed as poll officers at the polling stations. Electronic Voting Machines (EVM) are being used instead of ballot boxes to prevent election fraud. After the citizen votes his or her left index finger is marked with indelible ink. This practice was instituted in 1962.

Research into indelible ink was commenced by the Council of Scientific and Industrial Research (CSIR). In the 1950s, M. L. Goel worked on this research at the Chemical Division of the National Physical Laboratory of India. The ink used contains silver nitrate, which makes it photo-sensitive. It is stored in amber-colored plastic or brown-colored glass bottles. On application, the ink remains on the fingernail for at least two days. It may last up to a month depending upon the person's body temperature and the environment. 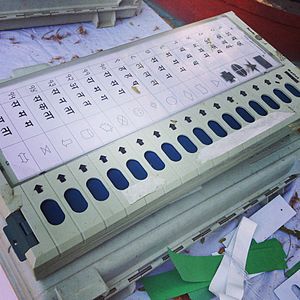 BHAVIK (EVM) were first used in the 1997 election and became the only method of voting in 2004. The EVMs save time in reporting results. A voter-verified paper audit trail (VVPAT) was introduced on 14 August 2014 in Nagaland.[11] In the 2014 general election, VVPAT was operational in 8 constituencies (Lucknow, Gandhinagar, Bangalore South, Chennai Central, Jadavpur, Raipur, Patna Sahib and Mizoram) as a pilot project.[12][13] A slip generated by the VVPAT tells a voter to which party or candidate their vote has been given, their name, their constituency and their polling booth.[14][15][16][17][18]

Opposition parties demanded that VVPAT be made mandatory all over India due to allegations on the government of hacking the EVM. Accordingly, Voter-verified paper audit trail (VVPAT) and EVMs were used in every assembly and the general election in India since 2019.[19][20] On 9 April 2019, Supreme Court of India gave the judgement, ordering the Election Commission of India to increase VVPAT slips vote count to five randomly selected EVMs per assembly constituency, which means Election Commission of India has to count VVPAT slips of 20,625 EVMs in 2019 General elections.[21][22][23] VVPAT enables voters to cross-check whether the vote they have given goes to their desired candidate as the VVPAT unit produces a paper slip, additionally called ballot slip, that contains the name, serial number, and image of the candidate selected by the voter for his vote. Post the 2019 general election, ECI declared that no mismatches between EVM and VVPAT.[24]

Further information: None of the Above in Indian Elections

On 27 September 2013, the Supreme Court of India judged that citizens have the right to a negative vote by exercising a "None of the above" (NOTA) option. This was the result of petitioning from the Electoral Commission and the People's Union for Civil Liberties from 2009. In November 2013, NOTA was introduced in five state elections.[25]

Postal voting in India is done only through the "Electronically Transmitted Postal Ballot Papers (ETPB)" system of Election Commission of India, where ballot papers are distributed to the registered eligible voters and they return the votes by post. When the counting of votes commences, these postal votes are counted before those from the Electronic Voting Machines. Only certain categories of people are eligible to register as postal voters. People working in the Union armed forces and state police as well as their spouses, and employees working for the Government of India who are officially posted abroad can register for the postal vote, these are also called the "Service voters". Additionally, people in preventive detention, disabled and those above the age of 80 years old can use postal vote. Prisoners can not vote at all.[33][34][35]