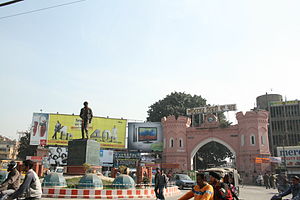 Amritsar (Punjabi: ਅੰਮ੍ਰਿਤਸਰ, meaning: The Lake of the Holy Nectar,[1]) is the capital of the Amritsar District in the state of Punjab, India. According to the 2001 Indian census, over 1,500,000 people lived in the city.

Amritsar is in the state of Punjab, India, 32 km east of Lahore, Pakistan. The Harimandir Sahib, also known as the Golden Temple, is there. The temple is the centre of the Sikh religion.

The city has been famous for many events in history. In the Jallianwala Bagh Massacre of 1919 under British Rule a large number of people were killed by British troops. The city is also famous for Operation Bluestar, a military operation in 1984 that was ordered by the Prime Minister of India of the time, Indira Gandhi. Many Sikhs were angered, as the holy Golden Temple of the Sikhs was damaged.