The Śvētāmbara (/ʃwɛˈtʌmbərə/; śvētapaṭa; also spelled Svetambar, Shvetambara or Swetambar) is one of the two main branches of Jainism, the other being the Digambara. Śvētāmbara means "white-clad", and refers to its ascetics' practice of wearing white clothes, which sets it apart from the Digambara "sky-clad" Jains, whose ascetic practitioners go naked. Śvētāmbaras, unlike Digambaras, do not believe that ascetics must practice nudity.[1]

The Svetambara and Digambara traditions have had historical differences ranging from their dress code, their temples and iconography, attitude towards Jain nuns, their legends and the texts they consider as important.[2][3][4] Svetambara Jain communities are currently found mainly in Gujarat, Rajasthan and coastal regions of Maharashtra.[5][4] According to Jeffery D. Long, a scholar of Hindu and Jain studies, about four-fifths of all Jains in India are Svetambaras.[6] 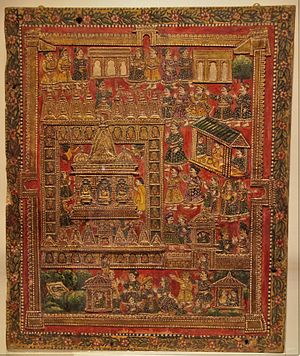 Tirth Pat on display at Prince of Wales museum, Mumbai

The Svetambaras and Digambaras disagree on how the Svetambaras sub tradition started in Jainism.[9] According to Svetambaras, they are the original followers of Mahavira, and Digambaras arose 609 years after the death of Mahavira (about 1st-century CE) because of an arrogant man named Sivabhuti who became a Jain monk in a fit of pique after a fight at home.[9] He is accused of starting the Digambara Jain tradition with what Svetambara call as "eight concealments", of rejecting Jain texts preserved by the Svetambara tradition, and misunderstanding the Jain ideology including those related to nuns and clothes.[9] In contrast, according to Digambaras, they are the original followers of Mahavira and Svetambaras branched off later in the time of Bhadrabahu when their forecasted twelve-year famine triggered their migration from central India.[9] One group of Jain monks headed west and north towards Rajasthan, while the second group headed south towards Karnataka. The former became Svetambaras and retained their "heretic" beliefs and practices such as wearing "white clothes" they adopted there, say the Digambaras.[9] Neither of these explanations can be found in early Jain or non-Jain texts. The earliest version of this Digambara story appears in the 10th-century CE, while the earliest version of the Svetambara story appears in the 5th-century CE.[10]

The Svetambaras have subtraditions. A majority of the Svetambaras are murtipujakas, that is they actively offer devotional puja in temples, worship before the images or idols of Tirthankaras and important Jain goddesses.[11] Others are split into various subtraditions where either Jain temples and halls are built but puja is minor, or where all construction and use of temples, images and idols is actively discouraged and avoided. These subtraditions began around 14th-century through 18th-century.[11] One of the key Jain scholar who opposed devotional temples, images and idols was Lonka Shah (c. 1476 CE). These later subtraditions are primarily Sthānakavāsī and Terapanth orders. Early colonial era observers and some early 20th-century Jain writers such as Malvaniya hypothesized that this movement against idol worship may be the impact of Islam on Jainism, but later scholarship states that the subtraditions arose from an internal dispute and debate on the principle Ahimsa (non-violence).[11][12] The new movements argued that the construction of temples or buildings of any kind, idols and images, as well as the puja rituals hurt and kill small creatures and microscopic life forms in soil, wood and other materials involved, and is thus against their core principle of non-violence.[11]

The newer Śvētāmbara subtraditions cover their mouth with a white cloth or muhapatti to practise ahimsa even when they talk. By doing so they minimize the possibility of inhaling small organisms.[11] The terapanthi order is strongly aniconic and has lakhs of followers in many parts of the world.[13][14][15][16]

Other than rejecting or accepting different ancient Jain texts, Digambaras and Śvētāmbara differ in other significant ways such as: